First day of classes post? Nope. As a brief summary, we only had 2 classes today – both in the morning – and they were typical first-day fare, which means no homework. So upon exiting the physics building, us postbacs milled around for fifteen minutes with a clear lack of purpose and direction. Eventually, someone mentioned that the JCrew Warehouse was having a bin sale.

I need new clothes and binder separators, and there’s a Staples next door. Afternoon? Set.

After briefly getting lost, I found the JCrew warehouse. It’s packed, mostly with women (and the occasional desperate-looking husband), and I’m handed a trash bag and an inventory slip upon entering. Classy. Fully seventy percent of this giant warehouse was under a giant banner labeled, ‘WOMEN.’ The men’s side, predominantly stocked with what appeared to be women’s shoes, was tucked away in the corner. Still hopeful, I headed over there and started browsing through a bin labeled, “PANTS.” I looked around and tried to discern some sort of organization, since the box labeled “PANTS” contained, to the best of my knowledge, primarily women’s cashmere sweaters. 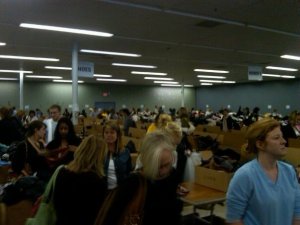 This is what it looked like, if I had actually taken this picture!

I soon stumbled into a fellow postbac, L. He was mid-trying on an actual male cashmere sweater – a rare find – when he spotted me and wandered over. After conferring on the sweater, a reject, we shuffled through more bins. Again, I found mostly women’s clothes, along with one vomit-colored button-down (ostensibly male).

This was not going well.

Suddenly, I heard a low rumbling noise. This sound was pretty standard to our area, since there are train tracks that run all around town. When the train goes by a coffee shop I frequent, the entire building shakes for ten minutes. This sounded a lot like that, so I was understandably surprised when a police officer, obviously very excited, yelled, “EVERYONE OUT!” in a remarkably high-pitched voice.

Now, out of any crowd, I’m pretty sure that JCrew Warehouse bin sale shoppers would score near the top of any kind of “nervous and overreacting group” list, especially considering the patrons at this particular sale tended to be 19-year-old white sophomores who have just learned to drive, evidently yesterday. To make matters worse, they were already overstimulated, probably by the vast abundance of women’s shoes (proven by misogyny science to send women into a frenzy when the price is right) that spilled over into most of the men’s section.

You can tell I was less than pleased with JCrew Warehouse organizational policies, snot that I am.

So when this security guard screamed “EVERYONE OUT!” – overzealously, I might add, since the danger level was roughly equivalent to the danger of Osama bin Laden coming back to life as a zombie from I Am Legend and armed with Scud missiles and a chain gun – what ensued was a screechy stampede for the exits.

Good thing my site’s not monetized, because I’ve “borrowed” literally every picture on this site from Google Images. Whoops!

L., in the middle of trying on a turtleneck, simply stared. After a brief pause, he turned to me and said, “How does this one look?”

After a minute or two, the horde drifted back inside. Shopping resumed for some five minutes until someone with a walkie talkie and armed with a YouTube video of the Indiana State Fair collapsing stage incident declared the store a disaster zone and kicked everyone out. Apparently there actually WAS an earthquake; an event confirmed when we noticed the ceiling lights were swaying.

L. and I joined a large group outside. Most were looking up expectantly at the roof, obviously awaiting a tragic, women’s-shoe-destroying collapse. After a minute or two, I decided to head on out sans any clothes haul since it was probably going to take the fire marshal to declare the warehouse good to go. Sigh. Safety. You cheated me of a vomit-colored shirt.

And you definitely cheated hundreds of irate sorority girls of their women’s shoes.

PS: Why the terrorists are winning: we evacuated the entire Pentagon, a building that successfully stayed up after being hit by a jumbo jet carrying thousands of pounds of explosive fuel, because of an earthquake that warranted only seven minutes of Twitter activity before the masses reverted to hashtagging about Will Smith’s potential divorce.