As a high school senior, I applied to six colleges. Had I chosen my own application path, I would have applied to two, maybe three schools, but my parents insisted.

Those two schools were similar in almost every way. Both were located in the South. Both were large state schools at the top of the academic totem pole. Both had strong sports programs and both had beautiful campuses.

I made my final decision, two days before the deadline, on three factors:

Seriously. That’s how I picked Chapel Hill as my home for four years. I liked their shade of blue better than the Cavalier’s orange; I thought the girls were better-looking, and I liked the fact that I wouldn’t have to purchase an entirely new wardrobe to fit in at Carolina – UVA is a “frattier” school, fashion-wise, and I have the dress sense of a golden retriever. 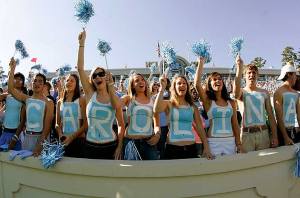 And Example B, UVA:

To evaluate my three arbitrary-but-important factors for school selection, I obviously had to visit the schools on my short list. Every high school junior or senior goes through the same rite of passage: along with Mom or Dad, they travel to a college of interest, take the tour while lagging behind the group trying to blend in with the college kids, and buy a t-shirt from the gift shop. After their parents embarrass them by asking a ridiculous question or twelve at the admissions office Q&A, everyone goes home.

Not so in medical school. When you build your list of schools, it’s largely based on where you think you can get in – not dissimilar to regular college. But you can’t visit medical school. You can’t take a tour of the facilities or pop in on a class. There is no admissions session, and there is no gift shop. I think.

So your “top choice” is an illusion. Maybe you like their curriculum. If you’re lucky, you have a specific research interest or clinical focus, and you chose schools that have a program you like. If you’re like the bulk of medical school applicants, though, you really don’t know what you want to do or what kind of medicine you want to practice. You’ve even been told by everyone in medicine that you’ll change your mind ten times about what you ultimately want to do before you do it.

I thought of this because my buddy and fellow post-bac of Take Five: The Story of Blackout Queen and Meathead fame, P., is now blogging about his medical school application experience, and wrote about having a top pick for school.

The gist of his post: “my top pick is anywhere that will take me.” While he’s selling himself a little short, his basic point holds true: there is no such thing as a top choice medical school – until the interview.

The interview is the last barrier standing between an applicant and a medical student, as I’ve written before. But to call the process all about evaluating the applicant is misleading – because at least half the process is the applicant evaluating the school. On Interview Day, you get a tour, an introduction, and a chance to lunch with med students. You can interact with people as part of their day-to-day and see what it’s really like to be at that school. And most importantly, it’s your only chance to get a feel for the place – your one shot to learn as much as you can about the school before you go home and, hopefully, on to the next one.

Or in my case, back to my job.

My first interview is this coming Monday. I’m sure I’ll write about my experience, though I won’t tell you where I interview in case I say something negative, which I’ve been advised is a bad idea in general. Oh well.

One thought on “The Illusion of Choice”