Part of my school’s central mission in educating medical students is to keep its students well. We have built-in retreats, access to mental health resources, and a variety of clubs designed specifically to promote wellness. The capstone of the program is this: once a year, the entire school comes together to compete in an almost-two day competition called College Cup. As I’ve mentioned before, we’re divided into four “colleges,” Hogwarts-style, primarily for the purpose of small group learning and logistics. But during College Cup, people don their colors, swag out with Thunderstix and tanks and masks (?) and Braveheart-style body paint, and yell themselves hoarse.

For instance, here is one of our College mentors – a senior faculty member here who normally leads our weekly ethics discussions with extreme seriousness – dressed like a serial killer/member of the Blue Man Group:

And one of my classmates, who discovered an old Stitch costume: 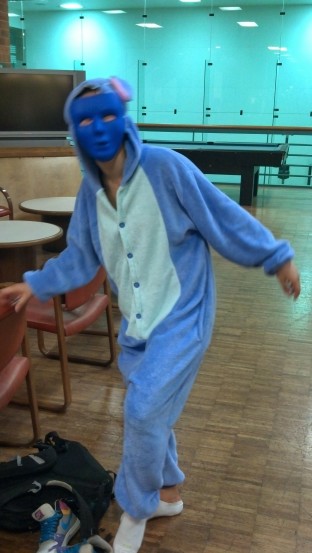 Anyway. For those of you that attended summer camp, College Cup is basically Color War, except with roughly 150 very smart, organized, Type-A hypercompetitive people.

(If you have no idea what Color War is, a) Google it and b) it’s basically hyperorganized intramural sports, but with much more yelling.)

The intensity level got extreme at times. Would you like some examples?

As far as I know, here is the post-College Cup injury report:

After the Cup was awarded last night (my roommate’s college won), everyone went out to a bar to celebrate not studying for a full 24 hours. It was fun, end of story. And now… back to the books.

Or maybe football. It is Sunday, after all, and we ordered Red Zone a couple of weeks ago.

One thought on “The College Cup! (About That Noncompetitive Thing…)”