As almost-4th years, our class runs an annual “Parents Weekend” where we invite our parents to visit for a couple of days to get a taste of what it’s like to be a medical student here.

Needless to say, the Mom and Dad jumped on the opportunity and flew into town Friday afternoon.

A bunch of us helped out with the activities during the day, mostly because we wanted to see our parents make fools of themselves. When we showed up to the morning talk from one of our deans, I was confronted with a visual of my parents sitting side by side in the dreaded front of the lecture hall.

GUNNERS!? I confronted them. In my defense, I sit safely in the middle of the pack during lectures – close enough to hear but not close enough to get called on. I didn’t understand how I could share DNA with these two strangers.

“I forgot my glasses and can’t see unless I’m up close,” complained my dad.

These are, incidentally, the same excuses Ragemonster uses when we call him out for gunning, although he generally communicates these days with loud “GWAAAAAAARs” and coarse hand gestures, such as violently dunking makeshift basketballs made out of jury-rigged medical supplies.

After my parents gunned their way through the introductory talk, everyone headed upstairs to our simulation center to play with laparoscopy tools, learn how to suture, and rotate through a couple of simulations.

My friend C. and I were in charge of one of these simulations, a code scenario where we pretended our mannequin was having a heart attack.

This was, to put it mildly, hilarious. A fair number of parents were physicians themselves, which made it a little less fun since they mostly knew what to do, but a much greater number were not.

Even when there was a doctor in the room, though, it was still fun. After we introduced the “patient” and set the group loose, our very first squad of parents had an ER physician among them. He promptly went up to the dummy, asked a question about pain, and then began barking out orders to the dumbfounded civilians in the room: “Can someone get some nitroglycerin and obtain a 12-lead EKG? Also we’ll need IV access and some oxygen. I’ll need someone to draw some labs and please notify cardiology.”

No one moved. C. and I, playing the role of nurses, stepped in to acknowledge his orders. This was shortly before suggesting that the other eight people in the room approach the patient, as most of them had backed up to stand plastered against the opposite wall 8 feet away, clustered in a group for herd protection.

C.’s parents arrived later in the rotation. To their credit, they were game for anything and immediately asked our mannequin how he was doing. When he said “I’m in pain,” though, C.’s father said, “I’m gonna go get a doctor,” busted out laughing, and backed away. C’s uncle then politely informed the patient that the ambulance had accidentally taken him to a liquor convention before turning to his brother for a high-five.

Ragemonster’s family arrived next. Ragemonster’s brother, whom we may appropriately call Beefcake due to his large, extremely gym-tolerant frame, decided to be the one to perform CPR.

Later, as C. and I picked up the broken pieces of the mannequin strewn across the simulation lab – casualties of Beefcake CPR – we debriefed what went well (very short time to CPR) and what could have been better (dummy was destroyed in the process due to too much lifting).

My parents arrived in the last group. As we set up the room again, my dad walked into the room, ruddy and beaming. “I just delivered a baby!” he said (the previous station was a birth simulation – yes, we have that too).

That explained the shrieks of simulated agony coming from the other side of the sim center.

When we started the code, my dad, ever the go-getter, leaned in to speak with the mannequin. “What’s going on?” he asked.

“My chest hurts,” the mannequin replied.

“What kind of pain medication would you like?” my dad asked, before bursting into laughter at his own joke, as the patient deteriorated into an arrest rhythm in front of us.

So now you see where part of my sense of humor comes from.

A parent at the back of the room looked at me and said, “maybe someone should grab the crash cart!” and gave a huge wink. Smart guy. I wonder if he knows what he’s doing?

Another parent dragged the cart over to the patient.

“Maybe we should hook him up to the defibrillator!” he called. Well, at least the guy has taken CPR classes before. Someone else attached the pads with a little help from C.

“Maybe we should administer 300 milligrams loading dose of amiodarone!” he called out, standing with his arms crossed at the back of the room.

“And maybe we should start a lidocaine drip too!” the obviously-a-physician-parent helpfully added.

“Okay, buddy, relax,” I thought as I confirmed we were starting a lidocaine drip (I was more than a little embarrassed that I couldn’t remember why you use that particular medicine).

After we finished the scenarios and lunch, we took everyone upstairs for an organ recital. You may remember the trials of organ recital from first year (Tearin’ Up (Someone Else’s) Heart), but basically one of our teaching faculty passed around a handful of human organs to the parents and explained a bit about what heart disease looks like.

Side note: Incidentally, one parent mentioned that she went to medical school with this same member of the faculty and sent him this very blog back in first year. This is simultaneously terrifying and a little thrilling, because it means a) I haven’t yet written anything bad enough to deserve a reprimand (emphasis on yet); and b) more people than mom and Grandma sometimes read this.

So if you’re still reading, Dr. A., hi, you did a great job at parents weekend and my parents loved you, and you’re the best professor ever please don’t hate me.

Anyway. The best part about organ recital was seeing the looks on everyone’s faces as they attempted to repress that complex mix of disgust/dismay/fascination that everyone has the first time they see human insides outside of human skin. Here are my parents, looking quite bemused at the heart they are holding: 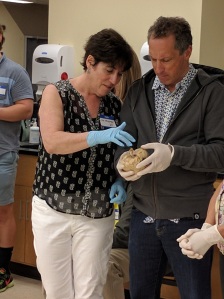 And here is my mother after being shown a very large spleen:

Notice also the other parent in the foreground who appears to be peri-vomiting.

My mother will kill me for publishing these photos, so it was nice knowing you. I leave my new plants (purchased by my parents for purposes of beautifying my otherwise spartan accomodations), Shaqtus One and Shaqtus Two, to my landlord, who increased the rent for no good reason this year. I will hide the Shaqti somewhere in the apartment for you to find, right next to the cure for blindness. Good luck.

(Deadpool reference, in case you didn’t catch it.)

The entire weekend was fascinating. Everyone had name tags so you knew who belonged to who, and in a lot of cases you could clearly see how a med school classmate – some of whom you know like family – got their various personality traits and unique weirdnesses.

It made me appreciate that sometimes-unfortunate personality traits, like gunning or out-of-proportion laughter, are genetic and not the fault of your friend. (Or yourself.) They (okay, I) never had a chance.