First of all, what the hell is an organophosphate and why should anyone care? And why is it the Holy Grail of toxicology? 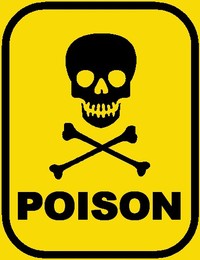 For starters, organophosphates are a class of chemicals that have lots of uses for killing small things, or big things in large or potent enough quantities. In their original application, organophosphates are pesticides, especially old-school pesticides we don’t use too much anymore, like diazinon (Real Kill) and Malathion. They happen to be phenomenally effective insecticides, for the same reasons that nerve gases are phenomenally effective humanicides.

Big agricultural companies in the United States still occasionally use these under limited licenses, but their use is more prevalent in developing countries without tight regulatory control. (This might remind you of my Carbon Tablets post).

Much more sexy than an insecticide, though, is that organophosphates tend to be the active ingredients in “nerve agents” or “nerve gas.” Depending on your frame of reference, the most dramatic examples of this are either:

– Nic Cage unrealistically jamming a plastic ball full of VX gas (the world’s most potent organophosphate nerve gas) into the bad guy’s mouth in The Rock, causing him to die in spectacular fashion,*** or

– The Japanese doomsday cult Aum Shinrikyo releasing sarin gas onto a crowded subway in Tokyo in 1995.

…And yes, if you’re rubbing your eyes and wondering, “wait, haven’t I seen that clip here before?” the answer is no, you saw a clip from earlier in the movie, and I love this movie.

Every medical student is, at some point, taught about organophosphate poisoning. Alas, this has nothing to do with the last truly great Nic Cage movie or Japanese ritual death cults; instead, this toxidrome is used to illustrate a pretty fundamental part of the human body: how nerves work.

This is actually pretty cool, so you might want to… 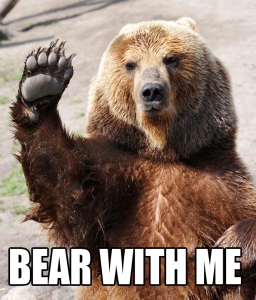 So for starters, nerves are super complicated. What you might think of as a single cable going direct from the brain down to a muscle or organ is actually anywhere from one to three nerves, connected by junctions. To understand nerve gas, though, we only need to focus on the last junction: where the nerve meets the muscle.

This, predictably, is called the neuromuscular junction. I know, you’re shocked it’s not called something that makes no sense in Latin, but this is one of the few things that the Dead White People Who Named Medical Things actually got right.

At the core of the neuromuscular junction is the question underlying all of neuroscience: how do you turn what is basically an electrical signal traveling down a nerve into a chemical signal that can be interpreted by a cell?

The answer lies with neurotransmitters, small chemicals that nerves use to communicate with each other and the rest of the body. When an electrical impulse reaches the end of a nerve, the end of the nerve (called the “terminal”) releases a bunch of a neurotransmitter called “acetylcholine.” ACh, as it is abbreviated, is actually the prime actor in terms of nerve-to-body communication – not serotonin, not dopamine, not anything else. But few people outside of medicine know this, because no pharma company has figured out a useful drug to manipulate acetylcholine they can market on TV.

(Well. There are drugs that play with acetylcholine, but mostly they just make you psychotic. Doesn’t make for a good TV ad.)

Anyway. So this is what the neuromuscular junction looks like, in cartoonized form: 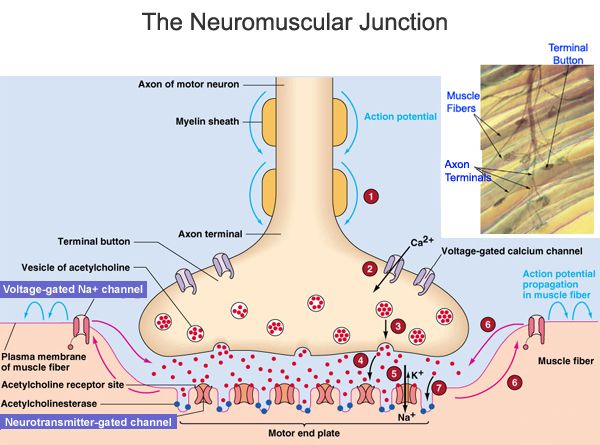 It’s not as complicated as it looks.

…Well, actually, it’s way more complicated than it looks, but we’re going to stay with the basics.

The end of the nerve, called the neuron, releases acetylcholine into the gap between the nerve and the muscle cell, called the synapse. The ACh then floats across the synapse to the muscle side, where it fits into receptors on the muscle cell. These fit together sort of like lock and key, which triggers a muscle contraction once enough of the ACh gets across. The ACh will “disconnect” from the receptor pretty much spontaneously, floating back around in the synapse again.

Here’s the whole key: there are a bunch of enzymes floating around in all the synapses, all of the time, called “acetylcholinesterases.” These break down ACh at a predetermined rate, all the time, so that ACh doesn’t end up building up over time and flooding the synapse. This would be bad: without acetylcholinesterase, ACh would constantly be attached to their receptors on the muscle side and you would lock up, rigid as a board, with every muscle in your body completely contracted.

In short, you would look like someone with tetanus, or the grimace emoji: 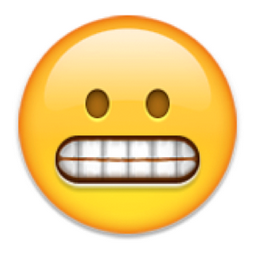 Okay. So the way all organophosphate poisoning works, whether we’re talking about a pesticide ingestion or exposure to nerve gas, is that it binds to acetylcholinesterase – the enzyme that breaks down acetylcholine – rendering it inactive. It then holds on to the acetylcholinesterase for a really, really long time. Like a stage 5 clinger.

That’s it! That’s all sarin gas, for instance, is – it knocks out a really important enzyme. It doesn’t sound so scary, until you remember that the Tokyo subway attack pretty much left people bleeding from their eyeballs.

So what happens once you’re exposed to sarin, or VX, or malathion for that matter? Well, basically all of the organs that rely on acetylcholine for information from the body’s nervous system go totally insane.

Have you seen Get Him To The Greek, or Pulp Fiction? (Yeah, here we go again.) You know the scenes where either Jonah Hill or Uma Therman, respectively, get stabbed in the heart with a syringe full of epinephrine and they wake up, dramatically, and go completely ballistic? Imagine that, happening all over your body, with like seven different organs, all at once.

We are not going to go into all of the ways that both of these scenes are ridiculously inaccurate because that would ruin them. So shut up, medical student readers.

Speaking of. We medical students, you will be amazed to hear, have a mnemonic to remember all the pieces of this. It’s called SLUDGE:

A less cool mnemonic is DUMBBELLS, which includes bradycardia (slow heart rate) and bronchorrhea (lots of snot in the windpipe) along with the other wet things mentioned above.

I, as a simplistic and comparatively stupid medical student,  prefer to think of this more simply: you’re hemorrhaging fluids from every orifice. Every orifice.

And bad, obviously. People with organophosphate poisoning literally drown in their own secretions – or their heart rate gets so slow that they can’t circulate blood around. Either way, they go into “cardiovascular collapse,” better known to the lay public as “death.”

Or they have massive, uncontrollable seizures – acetylcholine does stuff in the brain, too – which also results in something known to the lay public as “having a melted brain, and death.”

So what’s the treatment? Here’s the cool part, if like me you’re an aficionado of The Rock.

There are two main treatments: atropine, and pralidoxime.

In The Rock, Nic Cage has to stab himself in the heart with a syringe full of an ominous amber liquid to live through a VX gas exposure. Presumably this amber liquid is atropine, which sadly is neither amber nor requires an intracardiac injection. An IV works just fine.

The other drug is pralidoxime, also called 2-PAM for some reason. Pralidoxime essentially unbinds the acetylcholinesterase-organophosphate pairing, then gloms on to the toxic organophosphate to prevent it from doing any more damage.

I do not know what color 2-PAM is, but I am reasonably sure it is also not amber.

Anyway. So for people with organophosphate poisoning, we give them atropine and 2-PAM. The frequent question that people ask of toxicologists is, “how much atropine?”

The answer is unsatisfying: “enough.” You have to give enough atropine to counteract the effect of the poison, which could be anywhere from a small amount of atropine, like 1 milligram, to a huge dose. The goal is to give enough atropine that the patient’s secretions start to dry up – most importantly from their lungs, so they can breathe. The rule of thumb we follow is to start with 2 milligrams and double the dose every three minutes until the victim dries out.

To give you a sense of scope, we use 1 milligram of atropine for patients who have a critically slow heart rate as a “code” drug, which are drugs we use for people who are actively dying. The most atropine I’ve ever seen given, which was for a patient in Guyana who drank a bottle of an archaic pesticide now banned in the USA, was in total about 160 milligrams given over the course of an evening. If you had even a tenth of that dose injected into your bloodstream, you’d be extremely dried out, and also extremely dead.

So that’s organophosphate toxicity! Go forth and watch The Rock, if you haven’t already. 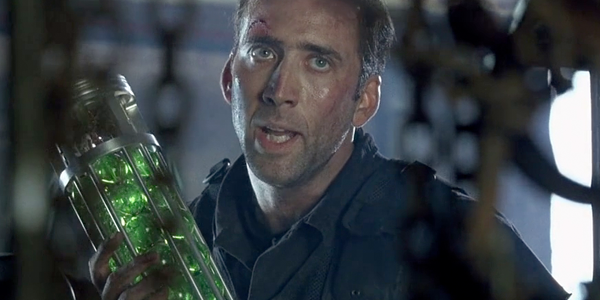 PS: VX gas is brown, not green. But if it were VX gas, Nic Cage would be holding enough of it to wipe out most of Manhattan.

One thought on “Tox ‘O Clock: Pesticides and Nerve Gas”