The new interns started their orientation this week.

I say this mostly because it means I am just a few short days away from no longer being “the intern.” This is fantastic news, mostly because it relieves me of the duty of explaining to non-medical people the vestigial and archaic distinction between an intern and a resident. Just so everyone (grandma) remembers:

I made that diagram. Aren’t you impressed?

I am overjoyed – truly overjoyed – to no longer be an intern, because it means a number of things that are very important to me. For one, I never have to set foot in the House of Potassium Repletion again. Nor am I required to rotate through the Trauma Surgery service, or do months on an inpatient medicine team. These latter items (trauma and medicine) also mean that I am no longer going to have to deal with the Tyranny of Safe Discharge Rules, which you can excitedly read about in Awaiting Return of Bowel Function and Rules for the House of Pain.

I have graduated from the lowest slave on the totem pole to… the second lowest slave. I have risen from being Fiddler to Toby.

(If any of you catch that reference, you were, for some reason, paying attention in 7th grade when you were forced to watch the entire Roots series over a 4-week period. I do not know why I remember this scene. I’m sorry.)

It seems that some reflection is in order, since one thing my medical school relentlessly hammered into us all was The Importance of Self-Reflection. They would cite many important papers published by old white people about how self-reflection both Improves Wellness and Prevents Burnout.

I have a blog. By default, I do plenty of quite public, self-aggrandizing reflection. And despite this, I am burnt to a charred crisp resembling a piece of cafeteria bacon, and my current idea of wellness is a tumbler of whiskey and an episode of Westworld before going to bed at 9:30pm.

But what the hell, might as well give it a try.

ONE. It’s much harder to write, and even talk, about being a resident than a medical student. In large part this is due to the confluence of two pressures: time (I have less of it) and fear (I have more of it). As my life has shrunk to include only the walls of the hospital, my best stories have become stories about patients. Even deidentified, these are verboten online.

My hospital employs a Chief Privacy Officer, who marauds around the halls of the hospital with a machete hunting for privacy violators. Should he find one, it is hospital policy that he unceremoniously lops off an extremity. I have had to be quite vague in my descriptions of patient stories (and my location), as I have a poor pain tolerance and tend to scream like a 4-year-old, which is embarrassing.

TWO. Intern year is less about learning medicine and more about learning the system. For that exact reason, it is a terrible year. I still know basically no medicine, despite now possessing both a medical license and a federal ID number for prescribing narcotics. This should terrify you all. I still do not belong here, and the Impostor Syndrome has not receded, not even a tiny bit. To the contrary: as upper-level residents and attendings pretend to trust me more, I wonder more and more often what horrible lapses of judgment this must represent in my mentors.

Every shift, I expect my program director to page me (yes, we still have pagers) and instruct me to pack up all my shit and go.

On the other hand, I am extremely talented now at two things:

– Changing my password ten times in less than five minutes, which allows me to keep my original password instead of having to remember a new one every 60 days (you can’t reuse any of your “last ten” passwords)

I’m sorry. I had to sneak that in there somewhere.

THREE: Don’t fight the power. Related to learning the system is understanding that the system completely owns and controls you. The Great Medical Hippo, which is my new term for this system, is a combination of The Matrix and 1984. The Hippo controls your entire life, and sits at a very special intersection between:

For instance, the primary reason I was so thoroughly miserable on the cardiac care unit was because I fought the power. I could not come to grips with the insane concept that nurses could not replete electrolytes on their own, despite them being both better at it and more knowledgeable about it. This was a matter of policy and inertia; fighting against it was a Sisyphean task.

I fought uphill, losing battles against the wellness program emails, trying to filter out invites to meditation sessions and concerts I couldn’t attend. I railed about other services taking advantage of the emergency medicine intern with scheduling sneakiness (I was, three times, scheduled to be in two places at once).

None of it helped. In fact, raising the hell I did occasionally turned the Hippo’s Eye of Sauron upon me, which is a fairly unpleasant feeling.

At this point, I have achieved a pseudo-Zen, nihilistic mindset best espoused by a fellow co-intern, whose motto is “nothing matters and everything is terrible.” Even if everything is not terrible all of the time, thinking it is – and more importantly, realizing that your resistance is futile, is critical for intern survival.

This is a big deal coming from yours truly, as I have been told frequently that I have a minor problem with authority.

FOUR: The true currency of residency is hours of sleep.

I made $34,000 a year my first job out of college. I lived in a decent apartment in St. Louis and lived comfortably. I was not poor.

$34,000, though, doesn’t give you much wiggle room in a budget. Money was always on my mind: when will I get my next paycheck? If I buy steak, I can’t go out this weekend. If I eat out on Friday, I have to cook at home the rest of the week. What is the bare minimum I need to continue existing this month, and am I going to get it?

Residency is exactly the same, except with sleep. I am perennially focused on the following questions:

I am not constantly thinking of sleep, but I am never not thinking about it. I am also now a terrific napper.

FIVE: Eat when you can, sleep when you can, and don’t fuck with the pancreas. This surgical lesson, imparted to me by a senior surgical resident in med school named Brownie (seriously), are true words to live by in general. Especially the pancreas part.

The typical way to end a reflective post like this is to tell an anecdote or two about how X or Y or Z “makes it all worth it.” The occasional thank-you from a patient, kudos from an attending, or a “catch” that saves someone’s life. The medical literature is packed with “narrative medicine” – the Great Medical Hippo’s way of saying stories, but mere stories aren’t publishable in academic journals – about these encounters that rejuvenated the writer’s love of medicine, or their drive to continue their eighty-hour weeks, or whatever.

I’ve tried, since starting this whole thing six years ago, to give nonmedical people a view behind what can be an opaque curtain. And so I will be very honest.

As someone currently in the churn, I find it… difficult to believe that my colleagues actually feel this way. For sure, it’s nice to hear you did a good job. It’s nice to hear “thank you,” perhaps because it’s sadly rare. It’s nice to know that you helped save someone’s life. All these things make you feel a little better, for a little while. But this question needs asking:

Is it worth it?

Is it enough? Really, is it enough? Are we doctors being honest when we say that all we need for our souls and well-being is the occasional thank you, or a pat on the back?

Consider the following: We go through four years of college, four years of medical school, incur incalculable sunk costs, and enter an arduous residency where 80-hour work weeks are the “suggested” maximum. 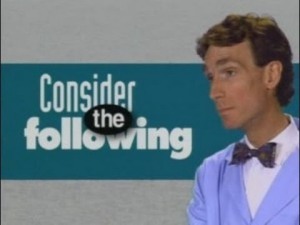 (I can’t believe I’ve had this site for 6 years and have never made a Bill Nye reference. UNTIL NOW.)

We are there on weekends. We are there at night. We miss weddings, reunions, births, funerals. And we aren’t paid for it: if you take an average of just a 60-hour work week (which is a laughable underestimate), we make $19 an hour during residency.

When we complain about this to full-blown doctors, the answer is either “be glad it isn’t worse like we had” or “there are a thousand premeds who would kill to be in your shoes.” An ex-girlfriend, now an attending herself, told me she now works more than she ever did in residency. And I was just sent an article called “How To Be A Good Emergency Physician” which includes the doozy, “If you want a lunch break, go sell shoes at Nordstrom’s.”

Fine. It’s a hard job with bad hours. But should it be like that? Should we settle for a world that systematically destroys your willpower to stay in it?

It’s not just the hours, which aren’t the hospital’s fault (as usual, you can blame the government for underfunding residencies). It’s how we spend those hours. We spend most of them battling an electronic record designed to maximize billing for the hospital, and we are chastised for not documenting so that coders can squeeze insurers for every dime. We spend them completing menial, clerical work that has no medicine in it at all. We spend them while our superiors tell us to suck it up.  Go sell shoes at Nordstrom’s if you don’t like it.

We crush ourselves and each other under the weight of years of preparation, years of training, and years of service, awaiting… what, exactly? A word of thanks? A nice car? Retirement age?

It’s a valid question, worth asking. Is it all worth it?

3 thoughts on “Intern Year is Over”