I write to you this time from a cruising altitude of 35,000 feet, in the midst of my second travel nightmare of 2015. Frankly, though, nothing can top the horror of the Three Days In Ramshackle-Houston Where I Potentially Came Close To Having My Kidneys Stolen. As such I will refrain from discussing the joys of getting out of Portland with a broken plane and a pair of enraged business consultants with Very Important Meetings early tomorrow morning that surely cannot go on without their august presences.

So I’ll talk about something totally different. All I will say is that this is what $500 in travel vouchers looks like: 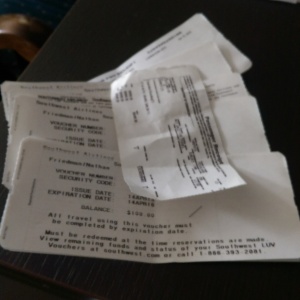 And this is where I slept (note armrests): 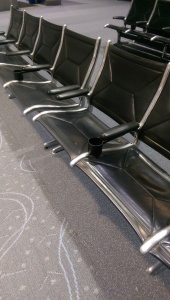 WHY DO AIRPORTS DO THIS!?

A couple of weekends ago, we held our revisit weekend for accepted students. Second Look Weekend is mostly responsible for the lack of posts over the last few weeks, since I was helping plan it.

The purpose of the revisit is threefold:

The committee consisted of five students. We spent the last 3 months exhaustively planning, which mostly meant “picking bars to go to when formal activities end.” Also tasting cake and pie.

Since I never wrote about my revisit weekend when I was myself an applicant (probably out of fear of having my admission offer rescinded due to my obvious lack of taste, which I suppose I should still fear), and because any time you cluster medical people in a small space, amusing things will happen since we are all huge nerds with poor collective social skills, here are some key points:

The first thing I noticed about the incoming class is that they are all taller and better-looking than me. I suspect my school, having made its crucial mistake two years ago admitting vertically-challenged and Bells-palsied myself, is attempting to compensate.

The keynote talk during dinner was by the dean of the med school, a brilliant MD/PhD who somehow talked about diabetes, iPads, restaurant food, and Trunk Club all at once. I didn’t get it either, but they had really good chocolate cake.

(I had taste tested the chocolate cake with the rest of the committee weeks before. I am normally decent at working in teams, insofar as no one has yet succeeded in their assassination attempts, but once I tasted the cake I was so annoying about picking it that no one even suggested the lesser options.)

Afterward, the accepted students went out and drank alcoholic, 2500-calorie milkshakes at a bar. So it was a good day.

The next day represented the bulk of our “programming,” where we decided it would be a good idea to throw everything we could think of at these poor kids and see whether any would run screaming from the building. Only two did, and neither were fast enough to make it very far despite the height advantage.

For me, the main high/lowlight was accidentally displaying, to a room full of overly interested maybe-students, a very detailed criticism of my history-taking and physical exam skills from my neurology preceptor. The students were overly interested because I had an extraordinarily bad day during this encounter, and the sentences on the screen included phrases such as “Nathan forgot to check reflexes, which is remarkable for a student on his neurology clerkship.”

I was wondering why everyone was staring so intently at the screen when I was talking.

After torturing them with current students, tours, and activities for most of the day we wrapped up the weekend with a night of “student entertainment” followed by more extracurricular activities. The student entertainment included performances by dance and a capella groups, plus a band of current first years that enterprisingly changed the words to “Santeria” to a GI-focused song, “Diarrhea.” It included lines about untwisting testicles and butthole exams. I, obviously, thought it was hysterically funny, because poop.

(They’re learning about digestion and reproduction right now. If you remember back that far to the land of pelvic and rectal exams, it’s fertile territory for humor.)

We took the students downtown, which more or less resulted in many accepted students, when queried, screaming “OH MY GOD I’M DEFINITELY COMING HERE!!!!!!!!” in a bar named after a trailer park.  I am now mostly facebook friends with these people, which potentially reflects more of my personality than I’d like to admit.

In all, it was a successful weekend. We have an online group for the accepted students, and I logged in on the Monday after SLW ended half-expecting to see the number drop by half. Amazingly, not only were the numbers the same but no one had yet filed an official complaint about unprofessional conduct by us.

That said… judging from the Saturday night we had, it’s possible the students just hadn’t woken up yet.

In all honesty, Second Looks are such a powerful tool for accepted students to figure out where to go. Yes, the schools put their best foot forward (although if I’m helping…). Regardless of the formal information we present, though, the culture of the school and the attitudes and personalities of the student body show through. Medical school is all about fit – you get basically the same information no matter where you go – and there’s no better way to determine fit than to check it out yourself.

2 thoughts on “A Second Look”