(Not that kind of phalanx.) 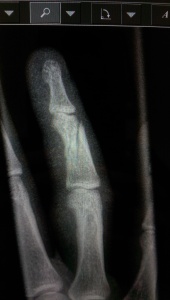 This is a “mildly comminuted and slightly displaced complete transverse fracture of the middle phalanx of the right 4th finger, with associated soft tissue swelling.” In translation I snapped my finger in half like a Q-tip. 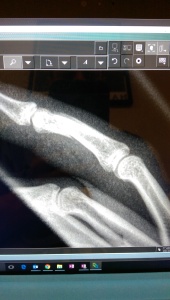 I broke my finger playing intramural flag football, which has to be one of the most injury-provoking sports there is. The lameness of this mechanism is superceded only by noncontact injuries such as stubbing your toe getting out of bed.

I got hurt on the second play of the game. Over the next thirty minutes, one player on the other team sprained his ankle and another also broke (and dislocated!) his finger. It would literally be safer if they just let us play tackle, which would have the added benefit of removing some of the dumbest rules in any intramural sport, ever.

But I digress. I’m on a month of anesthesia, which I did once before (see “Go To Sleep”) and loved. Anesthesiologists claim true expertise in two areas: airway management – intubating patients and ventilator stuff – and human physiology, because in order to totally control another human with drugs and machines, you have to know exactly how everything is supposed to work. Makes sense.

This does, however, make anesthesia particularly challenging for your author here, because even as a wise and worldly third year medical student my knowledge of human physiology is as follows:

I am not off base on the last point.

Thankfully this does not disqualify anesthesia from being fun, although I probably would not successfully match. The key advantages of anesthesia include:

Not surprisingly I thoroughly enjoy these things. There are few things more rewarding than successfully intubating someone, although I do not know why. It’s actually a somewhat dramatic and slightly brutal procedure.

Once the patient arrives to the operating room, a lot of things need to happen before the surgery is actually ready to proceed. This is known as “MAFAT” among surgeons: Mandatory Anesthesia F!*k-Around Time. Surgeons hate a lengthy MAFAT.

Anyway, MAFAT means we start by moving the patient from the hospital bed over on to the operating room table. If you have never needed an operation and haven’t seen this before, it looks like this: 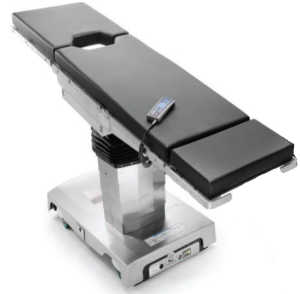 It is exactly as creepy as it looks. We hook up the patient to a bunch of monitors, put an oxygen mask on them, and drift them off to sleep using medication.

Once they’re asleep, we add a paralyzing drug that relaxes the muscles of the throat and stops the patient from breathing. This is obviously terrifying to the medical student because at this point the anesthesia team is totally in control of another human being’s vital functions.

At this point, someone gets behind the person’s head and intubates the patient. If I’m there and the patient is not a “difficult airway,” I’ll usually get the first crack. The first step is to open the patient’s mouth, which you do by jamming your thumb and middle finger between the patient’s teeth and then push them in opposite directions, like snapping your finger.

It turns out that this is an excessively painful and challenging step to execute with a “transverse fracture of the middle phalanx of the ring finger.” 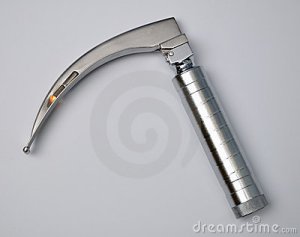 Once you’ve got the mouth open, you insert the laryngoscope. A laryngoscope is the L-shaped tool we use to be able to see the vocal cords, which are in medical terms, “way the hell down in your throat.” Saying that we insert the scope is a little misleading, because what actually happens is you jam this thing next to the tongue, cram it down the throat, and then use your entire upper body strength to push the lower jaw away from you. This ostensibly brings the vocal cords into view.

Thankfully this is performed entirely with the left hand.

(I say “ostensibly” because for whatever reason, the Anesthesia Gods often laugh at the medical student’s puny attempt to expose the vocal cords, which results in the attending saying “okay, let’s have the resident do it.”)

Anyway. With the larynx exposed, you feed the breathing tube through the vocal cords and into the trachea, and all is well. Also, you have to do this fairly quickly because once you start, the patient won’t be able to breathe again until you finish. What could go wrong?

Everything. But I won’t scare you with the details.

Of course, when you get the tube in, it’s exhilarating. It’s a technically challenging skill that is critically important to any future in the emergency or operating rooms, so obviously I love it.

Even with a broken finger. 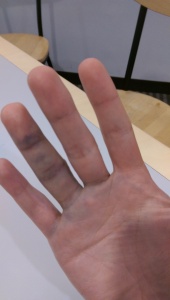 2 thoughts on “The Return of the Phalanx”