The second year of residency begins. The new interns have arrived (we have already lightly haz- uh, introduced them to residency) and are bright-eyed and fun to work with… just as I go onto off service rotations for two months.

Those of you who are loyal readers of this site (hello Grandmas, parents, and random fan club from South Africa) may notice a website name change. “Status Hazmaticus” proved too difficult to remember. I also realized that since my quest to complete my medical training has been marked by a tremendously amount of bumbling, falling, and general clumsiness, a more accurate website name – “Crashing Resident” – was in order.

Crashing Resident is also a play on an existing terrific website, Crashing Patient, which is an online textbook for emergency medicine and critical care.

Perhaps the most proximate reason for the name change is because tomorrow I start a month on the Liver ICU. You may be asking, “why in the world do you have an intensive care unit only for liver patients?”

The answer is that at one of the major hospitals where we work – that hospital may employ a very scary Chief Privacy Officer, prohibiting the disclosure of any and all details besides “I might work there” – we have a large liver transplant program. This attracts extremely sick patients with end-stage liver disease from all over the country, like a giant cirrhotic bug zapper.

In the words of one of my attendings, liver patients are “sick as shit,” and if we dumped them all into the regular ICU, no one else would ever have a chance at surviving their sepsis because it would always be full. Not Surviving Sepsis results in the loss of many lives as well as Medicare dollars for the hospital, which is unacceptable and would result in drastically lower quality food in the cafeteria.

So we have a Liver ICU, un-romantically abbreviated “LICU.” Yes, it’s pronounced how you think.

Why is a brand-new second-year ER resident rotating through the LICU? The answer is unsafe to discuss on a public forum but I believe involves the word “politics,” although the leadership has sold us on LICU by promising that they hand out major procedures like spun-cotton candy at a midwestern state fair. I am unconvinced, although since I  desperately love Doing Things and will thus give it an honest shot.

Yours truly happens to be the guinea pig for the ER-to-LICU experience. It has never been done before, at least not at this fictitious hospital. In addition to receiving a staggering amount of orientation emails with the entirety of the body BOLDED and ALL-CAPS and HIGHLIGHTED, I have been told the following by people in whom I have varying degrees of trust:

With these comforting words in mind, I set out to learn what I could about sick liver patients in the LICU.

The first thing I learned is that we round FOUR TIMES A DAY.

I will repeat that as I tend to misspell words when blood-rage clouds my vision. WE ROUND. FOUR TIMES. IN A 24-HOUR PERIOD.

We are not going to even begin to address this, because thinking about it too much will rupture my brain aneurysm. Or liver failure. Probably liver failure, if you catch my drift. 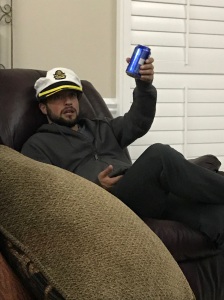 As some of you may remember, I despise rounding.

The second thing I learned: in order to understand the tiniest bit of medicine about patients in florid liver failure, it is mandatory to read a 168-page “handbook” that a LICU coordinator sent me a week ago and that I had not opened until I sat down to write this.

The first thing I noticed: This “handbook,” isn’t. It is a textbook, scanned into a PDF in 1997 and never touched since. I am expected to know this book thoroughly, which includes important pearls such as:

In medical school I knew what probably eleven of those words meant. Now I can decipher three of them. I also remember from fourth year of medical school that partying too hard can damage your liver: 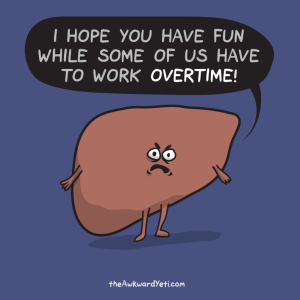 Also, every resident is this picture.

I learned one other important thing: there is no intern. If you recall, most of my complaints around intern year centered around the fact that interns do all of the bitch work. A chief perk of being an R2 and above, and probably the main reason residents don’t flee the ride on the Great Medical Hippo en masse, is that they no longer have to do such mindless clerical BS. They have an intern to do it for them.

However. The LICU has been deemed too dangerous for interns, so in addition to doing actual medicine, I am also once again responsible… for all the bitch work. Orders, consults, notes, signouts. I have been told that on average I will write between 15 and 25 progress notes a day.

Let us be frank: I am scared shitless of this rotation.

When I was on regular ICU, we took charge of a patient who had garden-variety liver disease and was being managed on the regular liver service (also known as “the floor”). The patient was getting worse and needed transfer to the ICU; the LICU was full. What I discovered is that at night, the LICU resident also covers the floor patients, which numbers as high as forty.

When we arrived to take over care of this dying man, for a brief second I had a window into my future. The night resident was talking into two VoIP phones at once and had four pagers clipped to her wrinkled scrubs. Two of them were simultaneously beeping jarringly different tones. She looked like she was about to dissolve into tears.

I work four nights in a row, completely alone in the LICU.

I am scared shitless of this rotation.

4 thoughts on “The Liver ICU”